August 31st 2009 – In his biggest live win to date, RedKings Team Pro Ramzi Jelassi scooped €170,000 in San Remo stage of the Italian Poker League. Not really understanding a lot of what the all Italian Final table players were saying, Ramzi let his cards do the talking and dominated the final sessions with strong play and some aggressive Swedish poker play.

–    “Easy Game 🙂 Had QQ as my best hand yesterday, which I lost, never any AA or KK. Owned them all the way and had a little bit of luck on the final table when I won the important all-in situations,” commented a happy Jelassi when the win finally sank in.

The most important hand of the day came when Ramzi was heads up against the Italian player Andrea Sapere, they were all-in and Ramzi held 44 vs Saperes A7. The flop brought another 4, giving Ramzi three of a kind and a pot for almost 90% of all the chips. It ended just 2 hands later when they again were all-in, this time Ramzi had K7 meeting Q10, and a 7 showed up on the flop and held the whole way to give Ramzi Jelassi the title!

Also delighted with this win are sponsors RedKings Poker who have backed Jelassi over the past year. Adding yet another title to their Team commented Jerry Land, Live Events Manager at RedKings.

–    “We know what Ramzi is capable of and this win was definitely on the cards. It is not often a player gets  such a golden opportunity as Ramzi had for the final day but he also dominated the Final table  with good solid poker in the typical aggressive Ramzi Jelassi style,  Congratulations from everyone at RedKings and the rest of the Pro Team!”

Ramzi now moves on to Barcelona which starts this weekend  and you can follow his progress live at the RedKings blog. 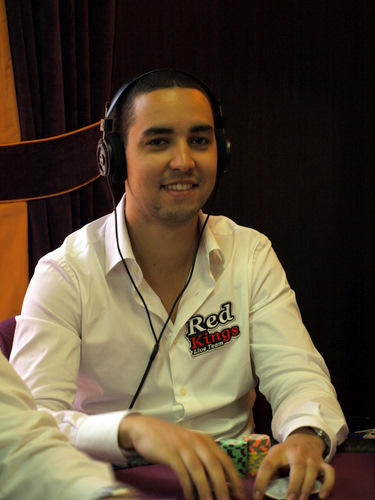