WSOPE: Schwartz Gets Over the Hump, and Main Event Starts

Saturday’s action from the WSOPE just outside Paris saw Noah Schwartz finally stop being the “oh-so-near” man, and pick up his first golden bracelet in Event #6. We also saw the first action in the Main Event as Day 1a played through the first flight.

Before the end of the €3,250 Mixed Max Pot Limit Omaha Event #6, Noah Schwartz had two 4th place finishes and a second in WSOP events, as well as a few other appearances in the top 10. Yesterday ended his “close but no cigar” reputation as he picked up his first 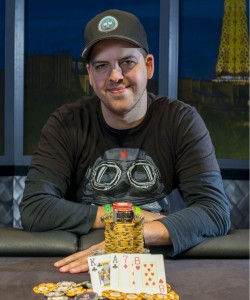 WSOPE bracelet and €104,580 in cash to add to his second place in the other Mixed Max event this trip to France.

Schwartz beat a local lad in Ludovic Lacay in the final heads up match up in a meeting of the two favourites. Schwartz now has two legs in the Triple Crown tripod, and just needs to add an EPT to his WSOP and WPT titles to join that exclusive club.

We’ll have a full report of the action from the semi finals onwards uploaded later today.

Day 1a of the €10,450 2013 WSOPE Main Event saw a worrying decrease in player numbers from the 2012 incarnation. 171 players rocked up to play for the bracelet, down from the 215 players who made the trip to Cannes Casino last year. With registration for Day 1b still open, it’s possible to see the 420 entrants from last year matched, but I for one would be surprised to see it.

We’ll have the outcome from Day 1b for you tomorrow.

Player of the Year

Not much has changed in the 2013 Player of the Year race, apart from the return to the top ten of Noah Schwartz after his first bracelet win. It’s going to take something big for one of the contenders to knock Matthew Ashton off the top spot, and will have in involve a visit to the WSOPE Main Event final table.

We’ll have the round ups from the Day 1b action from the Casino Barrière just outside Gay Paris in tomorrow’s report.