DSOP – The newest stop on the poker tour list!

Last night, the inaugural Dictators Series of Poker Season 1 Main Event took place at The Venetian in Macao. With a guaranteed prize pool of one ton of enriched uranium and a buy-in of one hidden Swiss bank account, this new poker tour event was a must-attend for any ruthless dictator! This was a winner-take-all event, so second place wasn’t good enough to get that nuke! If you really wanted it, you had to win the whole thing!

Which one of these lucky dictators take home a brand new nuke?

Last night, the final hand was dealt and the world finally saw the first-ever DSOP champion. Let’s take a look at the recap of the final table.

The night started out with players evenly matched in chips:

With the blinds at 10,000/20,000, Belarusian dictator, Aleksandr Lukashenko, and recently ousted former president of Ukraine, Viktor Janukovich, were the first to be eliminated in a spectacular double knockout by Russian tyrant, Vladimir Putin. Putin opened the action pre-flop with a raise to 65,000 from early position. Action folded around to Lukashenko who called from middle position. Everyone else folded and action was now on Janukovich in the big blind. Janukovich tried to flee the table, but was returned to his seat and reluctantly called for a three-way pot.

The flop came 2d 2c 2s and Janukovich instantly showed for his last 195,000 chips. Putin quickly took off his shirt and went over to feed his horse. After a few minutes of deliberation, Putin came back to the table and announced that he was all-in. Even more surprisingly, Lukashenko snap-called both of them. Janukovich screamed “I have A2!” and started laughing hysterically. Putin, still shirtless, turned over 5c 4s and said, “Nice hand Viktor! I‘m sure you will be very happy with your hand once I send you back to Ukraine.” Lukashenko and Janukovich instantly mucked their hands, kissed Putin’s feet and headed for the exit. With that completely standard knockout, Putin took a commanding chip lead with over two million chips.

The next few hours saw the dictators mostly arguing about the best methods to torture political prisoners as Putin quietly continued to steal chips from Karimov on his left. Eventually Karimov would become the next casualty of the final table when he got into a huge pot with North Korean maniac, Kim Jon Un. With the blinds at 20,000/40,000, Kim opened the action from the CO to 120,000. Action folded around to Karimov in the big blind who showed for a little over a million chips. Kim thought about it for a second and called. Karimov flipped over Js Jd and Kim showed Ts 6s. Bashar al-Assad noted the horrible call, but Kim defended his decision saying, “But they were suited and I have position.”

The table gasped when the flop came 7s 8s 9s, sealing the hand for Kim and eliminating Karimov in 7th place. Karimov did not seem too disappointed, however. In a post-game interview, he stated that he will now take some time off to boil alive some more of his political opponents and that he will likely participate in Season 2 of this great new event!

Despite the horrible call, Kim seemed pleased with himself and was in a great position to win the whole thing. 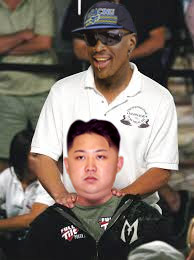 Kim getting a relaxing massage after knocking out Karimov

With Vladimir Putin and Kim Jon Un now firmly in the lead, Bashar Al-Assad was getting severely short stacked. Bashar was silent and seemed distracted all evening, possibly because rebel cockroaches occupied half of his hotel room a few days before. Bashar tried to use chemical weapons on them, but the cops were called, the chemical weapons were taken away and Bashar was slapped with a fine. Sheldon Adelson, the owner of The Venetian later gave an interview saying, “What’s the big deal? It’s not like he tried to play online poker.”

With all of these distractions and being hand dead for most of the night, Bashar showed his last 550,000 chips with As 3c from the button and was quickly called by Mahmoud Ahmadinejad in the big blind with Ah 5s. The flop gave Bashar a lot of hope as the dealer turned over 9c Jc Kc. Unfortunately, the turn brought a 4h and the river made Bashar faint a little when the dealer turned over the 2h. Just like that, Bashar was out in 6th place.

The next elimination was a bizarre one. Moammar Qaddafi, one of the two dictators who came back from hell especially for this tournament, was rambling about how he was going to win this tournament all through the final table, but he wasn’t playing any hands at all. Other dictators started growing suspicious of Qaddafi and his steady stack size because he wasn’t playing any hands. Turned out Qaddafi was adding chips stolen from other tournaments to his stack for which he was immediately disqualified. And just like his previous job, he ended up with a stick up his ass.

Later, Qaddafi did give an interview where he stated that he was extremely sorry about his behavior and hopes that he will be allowed back for Season 2. Qaddafi also mentioned that he is not getting along with his roommate, Osama Bin Laden. The devil commented on that, saying that he still might give them their own sitcom. More information will be available in a few days when the devil will give an exclusive interview on Fox News about how socialism is destroying hell. 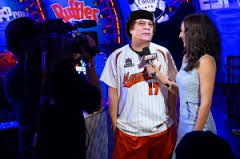 With that, the table was down to four players with Putin slightly ahead of Kim Jon Un and Hugo Chavez along with Mahmoud Ahmadinejad sitting on short stacks. The remaining dictators went on a break before continuing play.

Just a few hands after the dictators returned from break, a huge hand took place that resulted in the second double elimination of the night. With the blinds at 80,000/160,000, Mahmoud Ahmadinejad, one of the most famous holocaust deniers who qualified for the tournament through the Batshit Crazy Invitational Satellite, opened the action with a raise to 560,000. Putin got out of the way and Kim Jon Un quickly called from the small blind. Another recent resident of hell, Hugo Chavez, showed from the big blind for his last million chips. Ahmadinejad shook his head and reluctantly moved all-in, too. Kim Jon Un was getting way too good odds to fold at this point so he called, too.

Hugo Chavez and Mahmoud Ahmadinejad both turned over AK, while Kim showed 2s 2c. It was all over on the flop when Kim flopped a set, sending both Chavez and Ahmadinejad into a raging rant about a plot by the American Zionist government to knock them out and accusing Kim of being an American puppet. Despite their protests, both were removed from the final table and it was now down to heads up play!

Even though Kim Jon Un had a two million chip advantage to start, Vladimir Putin was the obvious favorite in their heads up battle mostly because during the break he threatened to ship back all the North Korean slaves working in Siberia’s logging camps if Kim tried to win it all. Unsurprisingly, during the next few hours Putin kept chipping away at Kim’s stack, taking a 3-to-1 chip advantage before Kim finally took a stand.

With the blinds at 150,000/300,000, Kim opened for 900,000 and Putin showed for the third hand in a row. Kim rambled something about the “American imperialists” and called. Unfortunately, he was drawing thin with Qc 3h vs Putin’s 4d 4h. The board did not bring any help to Kim and he was eliminated in second place. Or, as the only North Korean TV channel reported, “Supreme Leader wins DSOP Inaugural Tournament.” Despite being so close to all that enriched uranium that Kim so desperately needed, he was not overly disappointed about it, later commenting, “Well, at least I have more uncles to execute.”

And with that, Vladimir Putin became the champion of the first-ever DSOP Main Event! 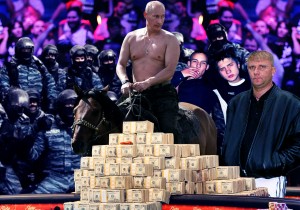 Putin and his entourage celebrating the historic victory