The rules of 7 Card Stud are quite different from Texas Holde’m. Unlike Texas Hold’em,
where you can look at your two hole cards before determining whether you want to put any money into the pot,
in 7 Card Stud, all players must first ante before they receive their initial cards. Texas Hold’em uses the blind
structure whereas 7 Card Stud uses ante’s.
There are five betting rounds in a complete game of 7 Card Stud Poker, not including Ante.

After the ante, Each player is dealt two cards face-down (hole cards) and one card face-up (door card). 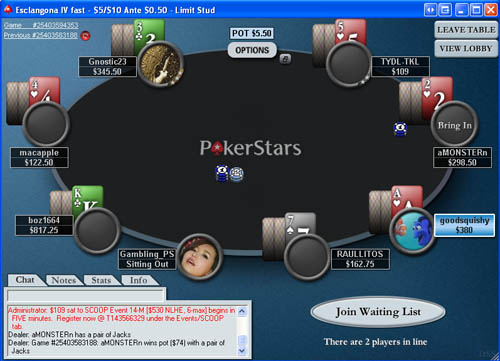 The action is started by forcing the lowest upcard by rank and suit to bet the amount that corresponds to the bring-in
for each limit. The action then rotates clockwise and players must either call the minimum bet forced by the low card,
or make the first raise, which only completes the bet to the lower value of the limit structure. For example, if you
were playing a $3-6 7 Card Stud game, every player may have to ante $.50, and
the low card by rank and then by suit is required to initiate action with a minimum
small bring-in bet, which may be $1.00. Raises thereafter are of the exact amounts of the fixed limits for each
betting round in a game of 7 card stud poker – in this case, the raise would be $2, and all subsequent raises
would be the full $3 bet.

According to the rules of 7 Card Stud, on the first round of betting, Suits are ranked: spades (highest), hearts, diamonds, clubs.
This helps determine the low card who must make the bring-in bet.
You can easily remember this order because it’s alphabetical!
On subsequent rounds, the high hand on board initiates betting action. If hands are tied, the player to the
left of the dealer acts first.

After the first round of betting is completed, each player is dealt one card face-up. This is commonly called 4th street.
The second round of betting begins, starting with the highest hand showing, and the bets are still $3 in our example.

Each player is dealt another card face-up (5th street), and at this point the limit is raised to the higher limit amount and
bets are now $6 in our example. Third round of betting.

Each player is dealt another card face-up. This is commonly called 6th street, and we have our fourth round of betting. 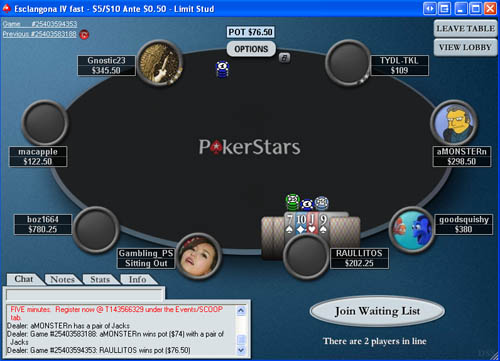 Finally, the seventh card is dealt, also known as the river card, but this one is dealt face-down. The fifth and final
round of betting begins. Players then show their hand, “the showdown”, and use any 5 of their 7 cards to make their best
possible poker hand. Those are the basic poker rules of 7 Card Stud.