Defeat is something we convey strongly in our facial expressions, some more than others. The champion of this has to be McKayla Maroney, the American gymnast who won a silver medal in 2012 and become famous for her “not impressed” face that went viral over the internet. 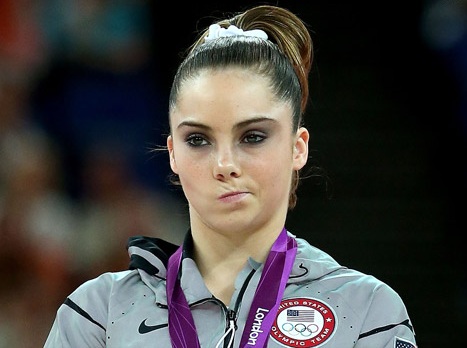 McKayla Maroney is Not Impressed

Looking at the 2013 WSOP Main Event final table, there were 8 faces of contempt throughout and only 1 face of joy. We already reported a summary of the final table, concluding with details on the heads up match won by Ryan Riess, so now we’re asking the question everyone is thinking… Who had the best bust face at the final table? 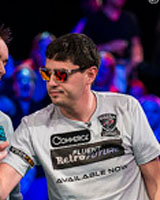 Mark Newhouse ended up taking last at the final table and also comes in last on our list. Perhaps his emotion is being hid behind his red shades. He may have a better poker face than the others, or maybe his expectations weren’t as high coming in as the 2nd shortest stack. But whatever the case was here, there wasn’t much on display. 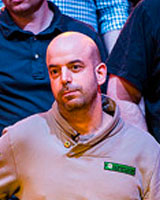 Amir Lehavot fell victim one spot before heads up. He did receive a nice payday for his efforts, so maybe that is what was on his mind during his defeat. Unlike Lehavot, you can see a clear look of almost indifference through his blank stare, but he’s hiding the sting well. 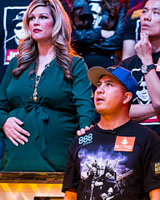 JC Tran was most people’s pick to win it all. This isn’t a surprise seeing as he was coming into the final table as the chip leader and with the most experience. JC had been there, done that. I think that’s why his bust face shows disbelief more than anything. His mouth slightly agape, arms at his side, while his girlfriend offers her hand on his shoulder for support, all the while clutching their unborn child. “It’s okay, Daddy did his best.” 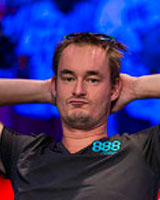 Now here we see Brummelhuis feigning relaxation with his arms behind his head, all the while his face saying, “Well, shit.” There is a clear similarity to Brummelhuis here and many duck-faced selfies from teenage girls on Facebook. 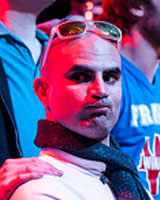 Loosli has all the signs here, arms crossed, brow furrowed, and lips frowned. He can’t even bare to look at the table. The red stage light shining on him also gives us a sense of ironic anger. While looking at him here I only have two questions; “How warm does that scarf keep him?” and “Is his friends touch consoling?” 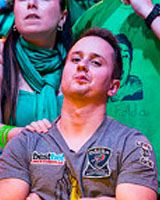 I’m not sure McLaughlin could pucker his lips closer together if he tried. Either he just ate a Warhead or busted out of the Main Event. Perhaps both? 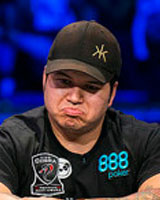 Farber was runner up in the main event, but more importantly, runner up on our list. His look says it all, it’s a mix of anger, doubt, acceptance and similar to the pouty face my son makes when it’s time for a nap. There’s also a dash of “not bad” in there somewhere. 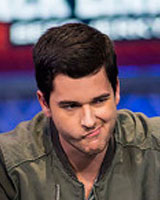 And alas, just check out that look. Dare I say Benefield gives McKayla Maroney a run for her money? It’s evident that he expected more out of his run than an 8th place finish, or he’s hoping the river card will change. Benefield still took home just under one million, but I’m sure he will be even more thrilled when he finds out FTR dubs him the Best Bust Out Face of the 2013 main event! 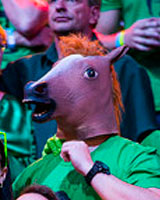 One of Marc-Etienne McLaughlin’s crew came prepared. Do I even have to comment on this one? It’s a shocked horse with a freaking orange mohawk!

And now let’s look at the only success face of the night, winning by default, Ryan Riess. 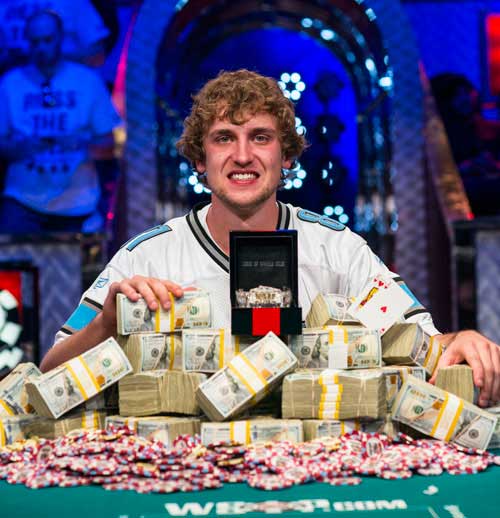 Now I know he’s happy, and who wouldn’t be after winning $8,361,570 and shipping the most prestigious poker tournament in the world? But his posed fake smile looks painful. Perhaps he just calculated how much taxes he will have to pay? However, I’m sure he had some genuine smiles when the final river card fell. Congrats to Ryan Riess (and of course, David Benefield)!